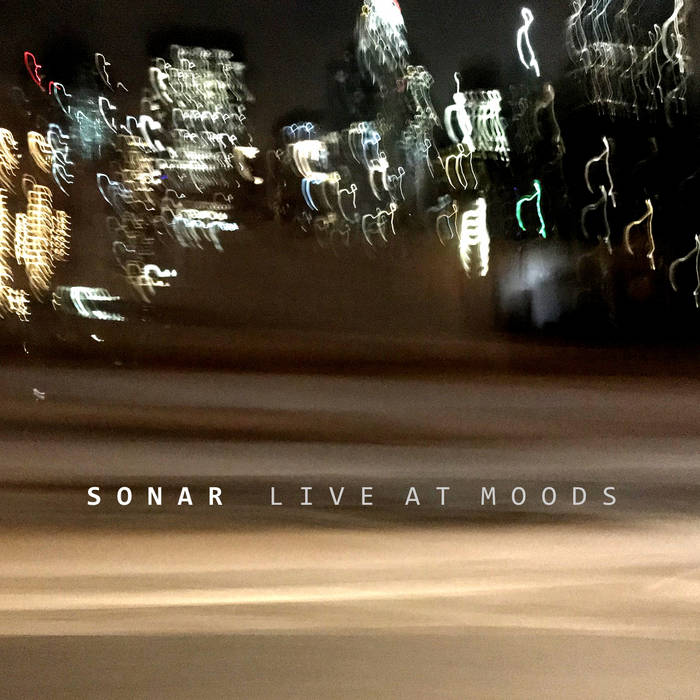 @KillTheBuddha A stunningg match between music, math and magic. Captivating from the first to the last poly rhythmic second.

steve hymer An incredible experience. Take the voyage. Just try to keep your jaw from slamming into the table. BUY NOW!

The stylistic blending of Sonar's precisely structured, polyrhythmic rock music and David Torn's freely improvised, raw and emotional guitar interjections - a trademark of Sonar's 4th album Vortex - is now continued in a live context on the six tracks of the Live at Moods album. There are three pieces from Vortex (“Waves and Particles”, “Red Shift” and “Lookface!”), a piece from Static Motion called “Twofold Covering” (the title of the track refers to the fact that the main bass riff of the piece is exactly the same as the guitar riff, just played half as fast and two octaves lower), a completely improvised David Torn solo piece called “For Lost Sailors” and “Tromsø”, a piece that Sonar played without David Torn. “Tromsø” is one of the first pieces that Sonar rehearsed together and it is the first track on the band's first album A Flaw of Nature. As a composition, it is a very minimal and austere piece that consists of only six small fragments in 9/8, but it remains one of Sonar's most dramatic and dynamic pieces.

Fusing a rigorous minimal concept with the power of a rock band and the sensitivity of a jazz combo, Sonar have quickly gained international reputation for creating a unique blend of music. With their slow-build approach to dramaturgy and avoidance of conventional forms, they focus on collective group efforts and a deeper kind of interaction amongst their members Stephan Thelen (guitar), Bernhard Wagner (guitar), Christian Kuntner (electric bass) and Manuel Pasquinelli (drums). Sonar's music is complex but still visceral, hypnotic but still dynamic. The ground feels as though it's continuously shifting beneath your feet in opposing directions as multiple motifs and rhythms flit about your head, circulating in different orbits.

Sonar was formed in late 2010 and have been on tour in the USA, UK, Canada, Japan, Switzerland, Germany, France, Romania, Liechtenstein and Austria. In 2012, they released their first CD A Flaw of Nature on Nik Bärtsch's Ronin Rhythm Records label. Cuneiform Records released their second full-length CD Static Motion in 2014. Their third album Black Light was recorded and mixed by Peter Gabriel and Tool producer David Bottrill and released by Cuneiform in 2015 on CD and vinyl.

For their 4th full-length studio album Vortex, Sonar invited producer and guitarist David Torn to work with them. During the recording, the chemistry between Sonar and David Torn worked so well, that Torn became a de facto fifth band member, playing extensively on every track. David Torn is a renowned guitarist, film-composer and producer, working with texture, high-contrast sound, spatiality & electronics in improvisational performance, music production and film-scoring since 1972. He is regarded by many as one of the most influential electronic guitarists of our time, including David Bowie and Madonna, who have both invited him to play on their records. He's played with countless well-known musicians including Tim Berne, Jeff Beck (Grammy winning production of “Jeff”), Mick Karn, David Sylvian, Tony Levin, Bill Bruford, John Legend, Michael Formanek, Tori Amos, Matt Mitchell, Meshell Ndegeocello, Laurie Anderson, Kaki King, k.d. lang, Ryuichi Sakamoto etc.

“Sonar, Swiss masters of multi-rhythm tritone minimalism, continue their career-long quest for a state of grace with Vortex, an album made with American impressionist guitar slinger David Torn, a combination of opposites that compliments one another marvellously on a scintillating journey into the abyss.” (Roger Trenwith, The Progressive Aspect)

“Torn's blasts, arches, and suspensions decisively enrich the sound of the quartet. Their mutual fascination for sonic textures is contagious, and I found myself exploring every minute of this well-weaved tapestry of polyrhythmic rock lustiness and groovy backgrounds. Vortex is a masterstroke that treats sound with prestige.” (Felipe Freitag, JazzTrail)

“One listen to even just a minute or two from Vortex and it becomes crystal clear that, in the 21st century, few groups have emerged as incomparable, innovative and imaginative as Sonar.” (John Kelman, All About Jazz)

“The combination of two seemingly disparate and distinct musical styles can often be an abject failure, or surprisingly may occasionally create an unexpected delight. In the case of Sonar’s Vortex, the band's polyrhythmic math rock style has been mixed and melded with David Torn’s exquisite tones and expressive, improvised guitar interjections to create something that is rarely unappealing, but is frequently magnificent.” (Owen Davies, dprp.net)

“Sonar is life at ground level; Torn is the weather. Their interaction feels at once organic and bifurcated. The aptly named title track could be a 10-minute sonic simulation of a tornado moving through a town...Torn add(s) a sunset-like brilliance to the already translucent beauty of Sonar's tuneful math.” (Britt Robson, The Jazz Times)

“Torn explodes chords into millisecond shards and sustains single notes through eons of emotion in rhythmically complex multipart compositions that sound unlike anything else in rock.” (Richard Gehr, Relix)

“Why else did I, one day, play this mesmeric album continuously, seven or eight times straight through? Is it rock or is it jazz – and, who cares? It”s brilliant.” (Michael Tucker, Jazz Journal)

“An anti-hero's masterpiece ... a revolutionary shot across the bow ... Sonar has defied the norm by crafting something singular and magical.” (Jeff Miers, Static Motion review, The Buffalo News)